PHOTOS]: ‘Use your energies and time wisely for the development of the country’ – Sports Minister cautions the youth ahead of elections

The Youth and Sports Minister, Isaac Kwame Asiamah has urged the youth of the country to use their energies...
Read more

Former skipper for Accra Hearts of Oak, Yaw Amankwah Mireku says he is ever ready to take the assistant...
Read more

Black Stars and Crystal Palace striker Jordan Ayew has been crowned the Sports Writers Association of Ghana (SWAG) footballer of the year.

The 28-year old beat off competition from Thomas Partey and Mubarak Wakaso to win the coveted prize.

Jordan was brilliant for the Black Stars at the 2019 Africa Cup of Nations despite the team’s shocking exit in the round of 16 to Tunisia. 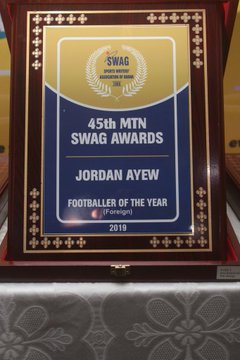 Know your coaches for 2020/21 GPL Season: Profile of Liberty Professionals...