There has been a new twist to what is believed to have been the cause of death of ace broadcaster; Kwadwo Asare Baffour Acheampong affectionately called KABA.

A colleague, Afia Pokuaa otherwise known as Vim lady does not believe the 37-year old died of the natural course and suspects someone has a hand in his death.

A livid Vim Lady took to social media and wrote:” “Why do we use juju and evil means to kill each other and undermine each other when we came individually?” “Why? Did God create anyone for anybody? WHY ARE HUMANS THAT EVIL?”

The post was in furtherance to an earlier one posted by another colleague Ohemaa Woyeje describing some persons as hypocrites who appeared not to like the former late political afternoon host of Asempa Fm but appear to be weeping more than the bereaved.

The host of ‘Work and Happiness’ on Adom FM said” KABA told me about one woman from Multi TV who frustrated him a lot especially when he was on TV”, she wrote.

Though Ohemaa Woyeje failed to name the person, she further described the person’s tears and mournful act as fake.

“I saw this same woman on Monday with her legs and waist like mine looking all mourning, going up and down just to appear in the cameras and pretending to have lost a loved colleague”. 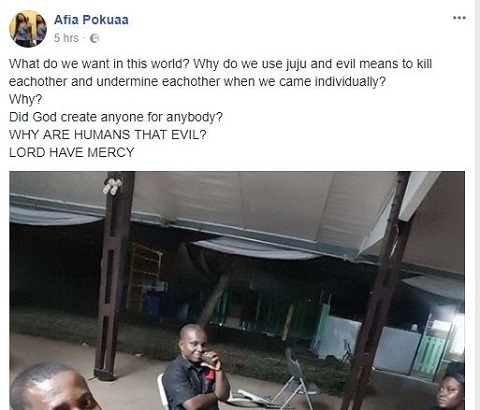 “Why didn’t she sleep and pop champagne to celebrate news of his demise?” she quizzed.

She prayed and said she wished KABA could come back to life to slap all the fake mourners, the backbiters, the haters and the pull him down people who made his stay on earth miserable.

“How I wish the dead have the power to come back and slap all the fake mourners, the backbiters, the haters, the enemies who come like friends, the devils in angelic outfits, the backstabbers, the pull him downs, the intimidators & suppressors, etc …. judgement unto their heads every time!!! They think we don’t know them. #KABA due ne amanehunu. 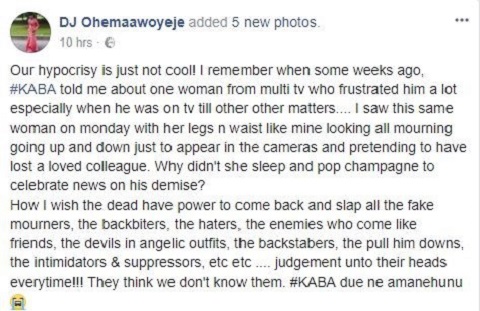