Stephen Owura Kissi
Journalism has been my prior job during childhood. With all things been so good for me, I am able to achieve my aim and fulfill the promise I made to my family. I am now a renowned sports journalist working with Ghana News Page.
The Communication director of the Ghana Football Association has confirmed that the two Ghana Premier League clubs will represent the country in the 2020/21 CAF Inter-club competitions.
Ghana Premier League heavyweights Asante Kotoko and Ashanti Gold will feature in the next edition of the CAF Inter-club competitions.
The Communication director of the Ghana FA, Henry Asante Twum said in an interview that the Executive Council have settled on the two clubs to represent the West African nation in the CAF Champions League and Confederation Cup.
Asante Kotoko will be playing the CAF Champions League whiles Ashanti Gold has the slot to represent at the CAF Confederation Cup. 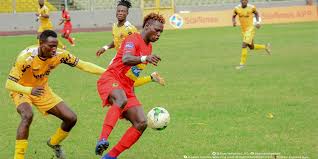 Henry Asante stated that the decision was made by the Executive Council of the Ghana FA after a marathon meeting held on Tuesday which has resulted in the cancellation of the 2019/20 football season.
“The decision to end the season was made today by the Executive Council of the FA. Asante Kotoko and Ashanti Gold SC are Ghana’s representatives for the 2020/21 CAF Inter-club competitions,” Asante told Accra-based radio station Angel 102.9 FM
“The Executive Council settled on the two clubs after the truncation of the 2019/20 Ghana Premier League season today”
“We will communicate the decision to the two clubs tommorow [Wednesday]. The runner-ups of the GFA Normalization Committee Special Competitions will be considered should any of the club decides not to play”.
The 2019/20 Ghana Football season was cancelled following the Coronavirus pandemic which has halted football activities in the country since March.
Asante Kotoko and Ashanti Gold SC represented the West African country in the last edition of the CAF Champions League and Confederation Cup respectively.

‘Politicians release attack dogs on you when you criticise wrongs, there...