The Coordinator for Special Initiative at Jubilee House, together with a number of other current and former executives of the Northern Development Authority (NDA), have been invited for interrogation by the Special Prosecutor Mr. Kissi Agyebeng.

The Office of the Special Prosecutor (OSP) said in a statement on Tuesday, July 26, “This is in relation to a contract awarded by the NDA to A&Qs Consortium for consultancy services under the Infrastructure for Poverty Eradication Programme, specifically in respect to the quantum of the contract sum.”

The OSP started looking into allegations of corruption and offenses related to corruption involving the contract that the NDA had made known to the corporation on June 30, 2022.

It instructed the Controller and Accountant General to immediately block payments resulting from the contract on July 20, 2022, according to the Special Prosecutor.

“The OSP has invited the Coordinator for Special Initiative at the Jubilee House and several serving officers including the Chief Executive and relevant past officer of the NDA for questioning,” Mr Kissi Agyebeng said in a statement. 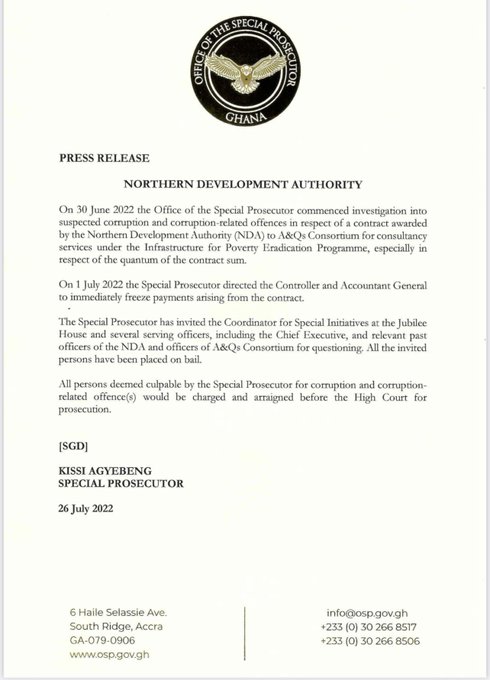 VIDEO: This is how Ghanaian Slay Queens SLEEP with Dogs in Dubai