Stephen Owura Kissi
Journalism has been my prior job during childhood. With all things been so good for me, I am able to achieve my aim and fulfill the promise I made to my family. I am now a renowned sports journalist working with Ghana News Page.
Ghana midfielder Thomas Partey continued his impressive performance for Atletico Madrid in their away draw with Barcelona on Tuesday evening.
FC Barcelona were held to a 2-2 home stalemate by Atletico Madrid in their Spanish La Liga showdown at the Camp Nou.
The two sides traded goals inside the opening 20 minutes with a Messi corner kick finding its way into the back of the net off the leg of Diego Costa for an own goal.
Minutes later, Saul Niguez levelled from the penalty spot after Marc-Andre ter Stegen was adjudged to have left his line early by VAR on his initial save from Costa’s effort.

Messi’s 700th finally came early in the second half when the Argentine beat Oblak from the penalty spot with a cheeky chip to give his team a 2-1 lead and become just the seventh player in football to reach that mark. 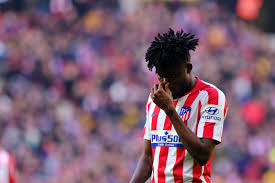 Atletico drew level in the 62nd minute with yet another penalty, Saul converting his second of the night after Yannick Carrasco was tripped by Nelson Semedo, who had just drawn the foul for Messi’s penalty earlier in the half.
Partey was on for the entire game and bossed the midfield, having a high 131 touches, an astonishing 99 accurate passes at 91.7%, four key passes and playing six accurate long balls from eight.

The 26-year old still managed to have one shot on target and two off target, while his six dribble attempts were successful.

He made five tackles, won 12 of 20 ground duels and was also solid in the air, winning four of five aerial duels.

He has been heavily linked with a move to several European clubs including Broussia Dortmund, Juventus, PSG and Arsenal.

Arsenal has been tipped to be the next destination of the 27-year-old combative midfielder.