Photos: People suspect freemasonry because they don’t know much about it – Kufuor

Former President John Agyekum Kufuor, a Freemason and Senior Grand Warden of the United Grand Lodge of England, has stated, the Craft of Freemasonry is about charity, transparency and accountability in advancing the cause of humanity.

The former president explained the core values of the club as charity, transparency and accountability in advancing the cause of humanity.

According to former President Kufuor, Freemason is forbidden in some churches and Christian communities because of the ‘High ‘Powers in the society as many frowns at it.

The president who was glad in his new elevation indicated that, the club which had been in secret for long was due to lack of proper understanding Ghanaians were attaching to the club.

“Freemasonry is an ancient craft and hitherto, it was almost a taboo to talk about it publicly because this is because they did not understand the principles underpinning it.”

“Members of the Fraternity at that time, kept the craft under cover, in order to protect its sanctity.”

“From the Church, the high-and-mighty in terms of politics, suspected this craft because they didn’t know much about it so the ‘‘Brethren of Old’’ decided to keep the craft under cover to protect it, not out of malice or evil intentions”. 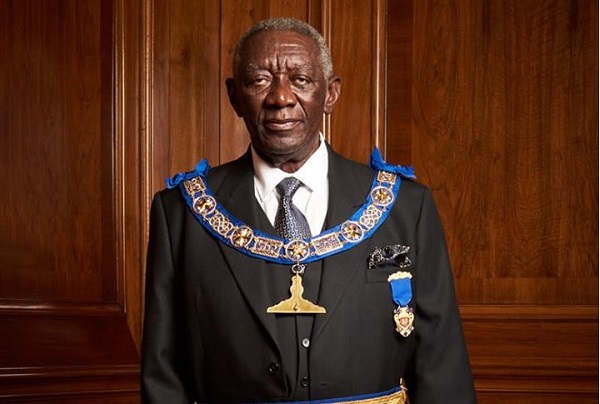 Mr Kufour who is also the Senior Grand Warden of the United Grand Lodge of England said, he was ready to welcome anybody on board.

The former president gave these remarks at the launch of a book titled: “The Freemasons; who we are; what we stand for and do; our relevance – An insider’s view”.

Former President Kufour, who would chalk 50 years of membership in the Club next year, purchased the first copy of the book authored by Brother Abraham Gyesie at a cost of GHC5,000.