Several attempts by Verdens Gang, a foreign-owned Norwegian tabloid newspaper to get John Mahama to respond to allegations that he travelled to Namibia with two representatives of the controversial Ameri Group to discuss energy opportunities in July appeared to have infuriated Joyce Bawah Mogtari, Special Aide to the former President, as she told the journalist her piece of mind.

“Mr. Mahama is still unavailable. It doesn’t matter if you call me ten times a day,” Bawah Mogtari said to the journalist who had contacted her on phone.

In a video which captures their conversation, Bawa Mogtari when asked if the former President had seen their request for an interview, replied in the affirmative but said he is not obliged to grant any interview.

“Of course, Mr. Mahama sees every request that comes… As I said, Mr. Mahama chooses which journalist he speaks to. You can’t force Mr. Mahama to speak to you. Can you force the King of Norway to grant you an interview?” she queried.

“I’ve dealt with many journalists, I’ve not dealt with one like you and I’m telling you the truth. You bug me with phone calls, you bug me with text messages and I’ve always tried to be reasonable and respond. Mr. Mahama was on leave, he is back and has led a delegation to Monrovia. He is not available at this time. Simple!” she fumed.

In 2015, the John Mahama administration signed a $510 million Build, Own, Operate and Transfer (BOOT) Agreement with AMERI Energy to help solve power crisis the country was enduring at the time.

There were claims the deal had been inflated by about $150 million but officials of the former administration have rejected the allegations.

A report by Verdens Gang revealed that Mr. Maham had entered into a cooperative arrangement with the Sheikh Ahmed Bin Dalmouk al Maktoum of Dubai, now owners of the Ameri Group.

Below is the full report

In 2015 the newspaper revealed that Umar Farooq Zahoor, who is still wanted by Norwegian police for fraud, and a sheikh from Dubai had made an energy deal with the Ghanaian government that included an overcharge equivalent to some USD 150 million.

Today VG can reveal that the former Ghanaian president this July entered into a cooperative arrangement with the sheikh’s company.

John Mahama brought the two men representing the sheikh to Namibia – seeking to clinch possible energy deals with yet another African nation: Namibia.

According to Namibian officials, Mahama claimed he was in Windhoek as an advocate for the African Development Bank.

At a news conference after Mahama’s meeting with Namibian President Hage Geingob, the former Ghanaian leader appeared with two men professionally based in Dubai.

Until now, it has not been officially known who these men were.

But VG can now reveal their identities:

One was Ameri Group CEO Maher Al Alili, who is also CEO of the sheikh’s private office.

The other was Mustafa Ahmed, who left behind a business card in Namibia embossed with the logo of the sheikh’s office. 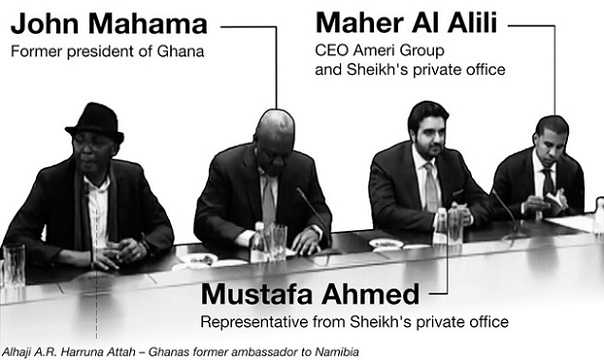 They both work for the sheikh who signed the controversial Ameri deal together with Umar Farooq Zahoor, who is wanted internationally by Interpol.

A government commission in Ghana, led by Mr. Philip Addison, has concluded that the deal is fraudulent, if Ameri does not come back to re-negotiate – or pay back more than USD 150 million.

In an interview with VG at the end of October, Albertous Aochamub, a spokesman for Namibia’s president, provided new and striking information:

Mahama himself set up the meeting in Namibia and arranged for the sheikh’s representatives to join him.

– A letter requesting an audience with the Namibian president was sent via the Namibian Ministry of International Relations and Cooperation from the office of the former President Mahama, as is customary practice, Aocham tells VG.

Not until Mahama’s delegation arrived in Namibia were his mysterious companions presented to the Namibian government, according to Aocham:

– Among his delegation were these two gentlemen, as well as the former ambassador of Ghana to Namibia, Alhaji A. R. Haruna, Aocham adds, then continues:

– Mahama informed President Geingob that he was in Namibia in his capacity as an AfDB (African Development Bank) advocate for African energy self-sufficiency, and brought UAE representatives to Namibia after they identified the country as one of the most attractive destinations for electricity infrastructure investments.

Since July there has been no further contact between the parties.

One of the men, Mustafa Ahmed, denies to VG that he had a role in the Namibia visit.

– I do not work for his highnesses private office,” he says.

– So what happened in Namibia?

– I advise several groups, not just them, he replies.

– Nothing happened in Namibia, so if you want to make a big story, that’s up to you.

– But the sheikh’s logo and your number appear on the same business card. How do you explain that?

– I don’t know what you are talking about. I have nothing to hide. I know him. I have advised him and advise him, but I do not work for him. I do not have an official position with him, insists Ahmed.

A few days later, the company’s CEO, Maher Al Alili, contacted VG and threatened a lawsuit. In 2015 the company had threatened to sue VG for USD 150 million for its reporting on the controversial electrical power deal between Ghana and Ameri Group.

The company said VG had published false claims about Umar Farooq Zahoor, the man who signed the Ameri agreement and is still wanted internationally.

– Who gave you the right to write about Umar? asks Al Alili, the CEO of Ameri Group, by telephone from Dubai.

– If there is anything wrong with the story we have the option of suing you, he says.

– The company does not want to be open with information or grant interviews with the media.

Al Alili nevertheless confirms that he was in Namibia working for the sheikh’s office.

He refuses to comment on Mahama’s ties to the Dubai company.

– You’ll have to ask Mahama about that, says Al Alili.

For seven weeks VG has tried to make direct contact with Ghana’s former president in order to obtain comment.

– Of course. Mr Mahama sees any request that arrives. I am telling you he is not available, and that I will get back to you if he becomes available, the special advisor told VG in mid-October.

VG’s many queries have not been well received by the ex-president’s inner circle.

The Ameri Group has repeatedly denied that Umar Farooq Zahoor, the man who signed the controversial energy agreement with Ghana in 2015, is a wanted internationally by law enforcement authorities.

That is not the case.

THUMBS UP: Umar Farooq Zahoor (to the right) at a party in i Dubai with drug-sentenced Manzar Arfat Afzal, one of his brothers, and one of Norways most notorious criminals, Imran Saber.
CREDIT: PRIVATE

– We have received a response from the United Arab Emirates stating they will not grant our request for the extradition of Umar Farooq Zahoor, he continues.

That means the UAE refuses to turn over the internationally wanted man, who has a Pakistani passport, to Norway.

Zahoor himself has claimed he no longer works for Ameri Group, though VG has disclosed that he still plays a key role in the sheikh’s private office, which owns Ameri Group.

This was also confirmed by a PR officer at the sheikh’s office.

– Yes, he is working there, said Ahmed al Baloushi to VG.

Zahoor has declined to comment on his professional affairs in Dubai.

– He sees no reason to comment on his working relationships or assignments to a Norwegian newspaper, and it is beyond my mandate as a Norwegian defence lawyer to express an opinion about this,” his Norwegian lawyer, John Christian Elden, writes in email to VG on Zahoor’s behalf.

Zahoor also points out that the Ameri-deal is still ongoing in Ghana.